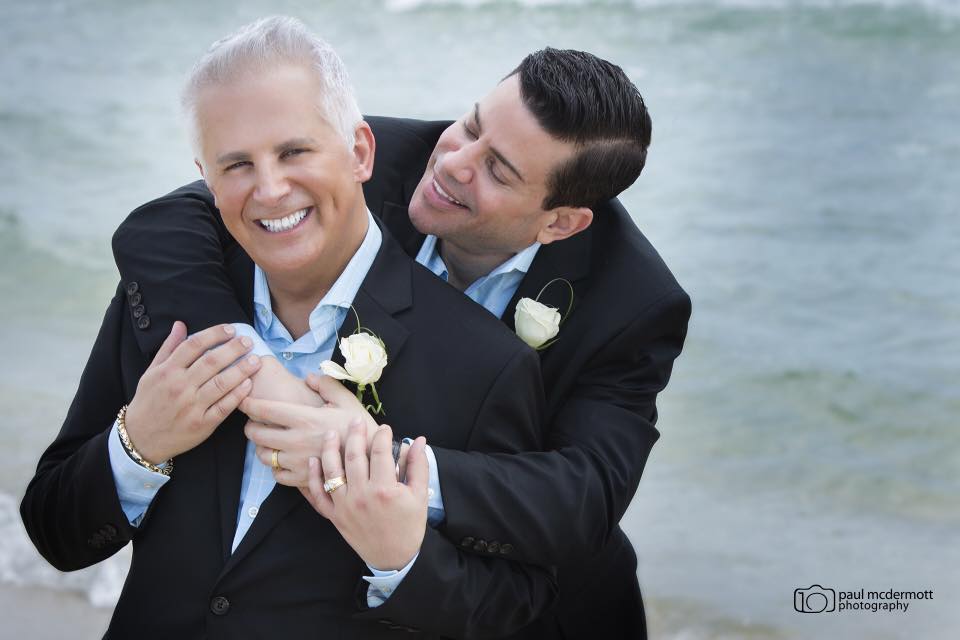 This past weekend I had the privilege to watch two individuals vow their love for one another. I honestly couldn’t be happier for two incredible people who deserve happiness. It’s kind of strange to think about how this all came to be. How time just flew by to this very moment. To really understand what I’m talking about I need to open up and take you down memory lane for a brief couple of sentences. When I was in the 7th grade my mother and father decided it would be in their best interest to separate and shortly after that my father came out of the closet. Now at the time I really didn’t know how to process the situation. How does a young kid understand that his father is gay and his parents aren’t going to be together anymore. My mother and father always taught me to accept people for who they are and that is exactly what did and still do. I love my father very much and wouldn’t change anything about him. I wrote a post about how my parents made me who I am today and without them both I wouldn’t be nearly as awesome. My father has supported me my entire life and I couldn’t be happier standing by his side while he held the hands of a man he loves deeply.

The ceremony was held on the beach in Ft. Lauderdale with an audience of about 20 (not including the public) close friends and family. My brothers and I each had a task to accomplish as “Best Men”. Yes, even though I am the favorite child my dad could not just choose one best man. Now I’m just kidding, I’m well aware that all my dads boys are his favorite; I just like to mess with my brothers. Mike was given the duty as Ring Bearer and of course he nailed it. He passed rings out like a straight boss and he didn’t drop one in the sand. Good job bro! Adam was in charge of the sand. That’s right, Adam was the sandman. Now, you’re probably asking yourself what does that actually mean. Well, there were three glasses filled with sand and one empty vessel. Each member from both sides of the family went around and poured some sand into the empty container until the two grooms topped it off joining both families together. And somehow Adam was in charge of that. That’s alright he nailed it too. Jon, was the man who got to sign the official marriage certificate. He busted out his 64 pack of Crayola and signed that document without hesitation. I want to say he used the color Macaroni and Cheese, but only he really knows. I was given the duty of the toast. Typical, give Paul the hardest of the jobs. The job that involves getting up a talking in front of people. Awesome. I must say though it went pretty well. My life goal of finding ways to make my parents cry in a positive way was achieved once again. Dad couldn’t hold back the tears.

I’m Paul, Dennis’ favorite son and I was asked to say a few words, but before I begin I would like to thank the nursing home for allowing dad to be here today. (Joke provided by Jon)

Our dad is one of the best human beings is our lives. Growing up he ensured our happiness by providing us with everything we needed for an incredible upbringing. From birthdays, Christmas mornings, baseball games and most importantly the unconditional love he gave us and you just can’t fabricate. Dad always just wanted one thing for his boys. Happiness. I’m proud to call this man my father and I couldn’t be happier for him; especially today. He spent 30 years selflessly providing for the people he loves the most and if there is someone who deserves happiness, it’s dad, but there is someone else who also deserves happiness. Josh, from day one I thought you were pretty freakin’ cool and we can see how happy you two are together. All of us here today couldn’t be more excited to call you step-whatever the heck you wanna be called. You’re awesome, and a truly genuine individual.

So here’s to dad and Josh and wish you both extended happiness.

We all couldn’t be happier for dad and Josh and support them with all of our hearts. Welcome to the family step-dude-man-guy. You rock and I’ll hit you up for money soon as a true son would do.

Wishing you both an eternity of love and happiness together.